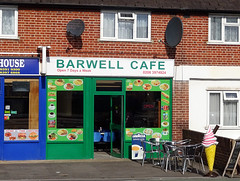 British cafe in Chessington, just down the road from Chessington South Station.

It's a fairly standard greasy spoon, with a tiled floor and eight Formica-topped tables with four blue bucket seats firmly fastened to each. Half-height wood panelling on the walls is covered with a thick layer of brown paint, and generic stock art prints sit above, along with a couple of photos of the owners accepting various awards.

Kake visited on a Monday morning in July 2017. There were a couple of other customers in when I arrived a little after 9am, and a few more were in and out while I was there. The radio was playing quietly.

I went for the "breakfast choice", which lets you specify your own preferred components for a cooked breakfast. One sausage, three thin slices of black pudding, two hash browns, beans, mushrooms, and a slice of brown bread photo came to £5.30.

The sausage was low-quality even for a greasy-spoon sausage, and had split in the deep-frier. The black pudding was mushy, crumbly, bitter, and underflavoured; even though the slices were very thin, I only managed to finish two of the three. There was nothing wrong with the bread, but the margarine it was pre-spread with tasted so artificial that I only ate half of it. The beans, mushrooms, and hash browns were fine, though, and a mug of tea (90p) came weak as requested.

Service was taciturn but efficient, with tables cleared and cleaned very quickly.

Child-friendliness: They have a children's menu with one vegetarian option (egg, chips, and beans).

Accessibility: No steps to get in. Tables and chairs are fixed to the floor. The toilet is round the back, down a narrow side alley and through a yard. It's a large cubicle with a high toilet and low sink, but on our visit the door was blocked with bins, making it hard to get in. (The light and lock were out of order, too.)