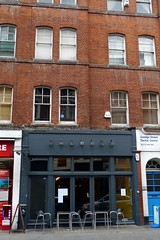 A tapas bar on Goodge Street in Fitzrovia.

This is a long, thin space with dark wood and extensive cabinets filled with wine bottles for atmosphere. There are large tables up the back of the room, with a bar and stools nearer the entrance. It's far more of a tapas bar than a restaurant, with food available all day. There's an extensive wine list where they pick out a few of their favourites by glass, as well as a notably lengthy sherry list.

Cured meats, cold tapas and cheese are served all day, but seafood, meat, salad and vegetables are only served from noon-3:30pm and from 5:30pm-10:30pm photo of menu in November 2009.

Ewan, Kake, Sarah, and Kat visited on a Tuesday late afternoon/early evening in November 2009, as part of a tapas crawl. We sampled plenty of the plates and found them to be mostly of a high standard. All the wines we tried were of a good quality.

From the bar menu we tried the boquerones en vinagre (marinated anchovies, £3.50) photo and some tasty zanahorias a la Sevillana (Seville spiced carrot, £1.50) photo, fetchingly served in a decorated metal mug and full of flavour despite being (intentionally) served cold. From the cured meats menu, the Lomo Iberico Cebo (£4.50 for 40g) photo, Chorizo Extra Bellota (£3.50 for 50g) photo and Morcilla (£2 for 40g) photo were all fine. Empanadillas of, respectively, tuna photo and vegetables photo (£3.50 each) were both tasty. Croquetas de jamón y pollo (ham and chicken croquettes, £1.25) photo were particularly good, with a beautifully creamy interior, and not suffering from the overcooking problem previously noted by Dos Hermanos (linked below).

When the rest of the menu became available, we ordered a few more plates. The mollejas con alcachofas (sweetbreads with artichokes, £6.50) photo were particularly tasty, but the one vegetable dish we tried, escalivada (charcoal-grilled aubergine, pepper and onion, £4.50) photo, was slightly disappointing.

Service was mostly fine, certainly not unfriendly, and tap water was brought out in a jug, although one of the waiters took a good five or so minutes to get back to us when we asked to order more food despite there being few other people present.