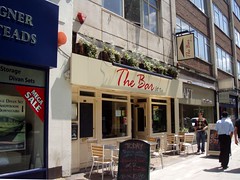 A bar on Tottenham Court Road, formerly known as the Pint Pot.

This bar stretches back a fair way into the building and has a fairly bland drinking barn atmosphere, as local office workers (and occasionally students from nearby UCL) pack it out after hours. There are some tables out the front (and smokers can also sneak out the back door), couches near the front of the bar, and then an assortment of tables in the larger rear area.

No ales at the bar (except a few solitary bottles of Old Speckled Hen in the fridge on a December 2008 visit), but Hoegaarden and Staropramen (£3.30/pint) are offered, amongst the usual lagers. They advertise their cocktails, but the list is fairly short and the range of alcohols on offer behind the bar isn't particularly wide.

There's a basic food menu, and between 5pm-8pm (happy hour) they bring around small plates of free food (onion bhajis, prawn blinis and the like), from time to time.

They have pub karaoke on Thursday nights from around 8pm onwards.