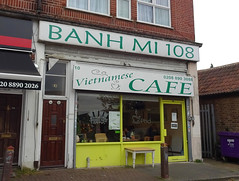 It's a small space, with seating for just 20 or so. The decor is simple: cream walls, a pale wooden floor, and wood-effect tables and chairs. Large windows at the front let the sunlight in. Cutlery is stacked in plastic rattan-style containers on each table, next to bottles of hoisin sauce, fish sauce, and sriracha.

Kake visited on a Wednesday lunchtime in May 2017. It was about half-full when I arrived around 12:30pm, and the music playing quietly on the radio was almost drowned out by conversation.

I went for the vegetarian banh mi (£3.50) photo, which used fried gluten as the protein component. The bread was fine, but nothing special, and there was just a bit too much butter on it for my taste. I'd also have preferred a higher ratio of filling to bread. The vegetables were only lightly pickled. The gluten worked really well, though, and had a good meat-like texture.

Service was somewhat standoffish with me, though friendlier to other customers who seemed to be regulars. No service charge was added to the bill, and I couldn't see anywhere obvious to leave a tip (you pay at the counter rather than at your table).

Accessibility: A small step to get in, no more than an inch or so. Another small step to the toilet, but this also involves a 90 degree turn through a small and somewhat cluttered lobby.