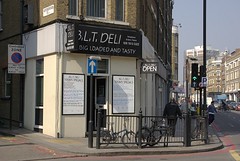 BLT Deli ("Big Loaded and Tasty") was a takeaway only sandwich shop at the junction of Curtain Road and Great Eastern Street in Shoreditch. According to Google Street View, it closed down by May 2016.

A takeaway only sandwich shop at the junction of Curtain Road and Great Eastern Street.

They do rather a lot more than simple sandwiches, also offering a wide range of wraps and salads as well as various hot food and a daily changing choice of both sandwiches and meals from the carvery.

Quality is generally very high, with sandwiches being freshly made to order, and portion size is rather huge. This doesn't come cheap, with sandwiches often setting you back upwards of £4 (prices as of April 2007) and a roast costing between £4.50 and £6.50 depending on what size of portion you ask for.

They have three or four daily specials, both in sandwiches/wraps and hot food. There is a board outside which is updated with the current specials menu.

Some of their wraps are quite impressive, such as the Christmas Extravaganza Wrap photo.

It gets very busy at lunchtimes, with the staff calling out for the throng of customers to raise their hands when the sandwich they are after is called out and then making them in batches. The center of the counter is where the carvery is located and it's easier (on yourself and the busy staff) to queue up there if you want non-sandwich hot food.