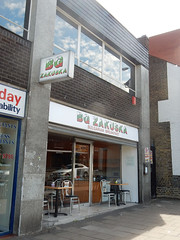 Bulgarian cafe and bakery in Barking, part of a small chain.

It's quite small, with seating for around 20 people inside and four more just under the overhang of the building at the front. The fully-glazed frontage offers a rather uninspiring view onto a roundabout (though bus-watchers will be well satisfied). Terracotta tiles cover the floor, and the walls are painted in orange, grey, and cream.

Hot food options are displayed at the counter; these change frequently but examples include chicken and rice, lamb with potatoes, moussaka, and tripe soup. They also do various savoury pastries, cold or heated in a microwave, plus a couple of sweet ones. The selection of pastries available at any given time varies, with freshly baked items being brought out throughout the day.

Coffee and tea are available, and a fridge holds imported soft drinks such as ayran (a fermented yoghurt drink) and boza (a fermented wheat/millet drink). The bar in one corner is unused, left over from the previous occupant.

Kake has visited several times now. On a Friday morning in November 2015, there were six other customers in when I arrived around 11:30am, all engaged in lively conversation. A flatscreen was showing a TV drama in the wrong aspect ratio; when this ended, it was switched over to music videos with the sound on, though not too loud. On a Sunday afternoon in September 2016, there were four people inside and four outside at 3:45pm, as well as a steady stream of takeaway customers. The flatscreen was again playing music videos, not too loud.

A takeaway cheese and leek banitsa (£1.60 in October 2015) photo whole, photo cut up tasted freshly-baked, with soft layers of pastry enclosing salty white cheese and leeks cooked to a gentle sweetness. There was a good balance of leeks to cheese.

Ham and cheese banitsa (£1.80 in November 2015) again tasted fresh, but was unevenly reheated, with a big cold bit in the middle. Despite being eat-in, it was served in disposable packaging, as was a cup of tea (70p).

Zelevi sarmi (£1.50 in September 2015) photo consisted of a large leaf of pickled cabbage rolled around a filling of rice and minced pork, coated with a thin tomato sauce. It was served at room temperature, which made the filling a little claggy — it'd have been much nicer hot. The filling was bland on its own, but just right when eaten with the slightly sour pickled cabbage wrapper. This came with a bread basket containing three generous slices of fairly uninteresting bread (at no extra charge).

Kake's verdict: Fine for a quick bite if you're in the area, though it's probably worth making sure your food is heated properly.

Accessibility: A step to get in. Once you're in, it's step-free to the toilet.