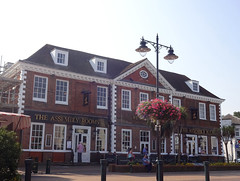 It's somewhat grander than many Wetherspoonses, being situated in a large freestanding building on the edge of a pedestrian area. The main seating area is a large, high-ceilinged space, with tall windows letting in plenty of sunlight. Wide pillars separate this from the bar. A carpeted area to one end has a couple of sofas and more seating. There's also some outside seating at the front.

When Northern Steve, Elvum, and bob visited on a Thursday evening in July 2009, most of the tables were taken, but there were a couple spare. When Kake visited on a Thursday lunchtime in September 2016 it was less than half full inside, but still plenty of people in, with a good buzz of conversation. No music was playing.

In July 2009 they only had three real ales on: Summer That, Abbot Ale, and Ruddles Best. The Summer That was OK, but the Abbot Ale was bad. In September 2016, the ales were Binghams Vanilla Stout, Little Beer Corporation Little Kahuna, Sharp's Doom Bar, Adnams Broadside, London Pride, Abbot Ale, and Greene King IPA. A pint of lime and soda was 80p.

They have free WiFi provided by The Cloud, which requires registration but doesn't check that you've used your real email address.

Child-friendliness: There were a couple of small children present on our September 2016 visit.

Accessibility: Step-free access via a ramp to get in and another ramp to get to the bar. Both ramps are shallow but include 90-degree turns at the ends. There's a RADAR-locked accessible toilet on the level, with a sign indicating that a key is available behind the bar. There are a fair few internal steps but most or possibly even all can be avoided using the ramps.