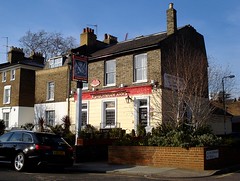 Inside, it's a small space wrapped around the bar. Entry is into the lighter, airier part, with dimpled windows decorated with a simple stained glass border. Tucked down one side of the bar is a cosier area. Exposed floorboards sit underfoot, and a large painted map of Greenwich is on one wall. A flatscreen is mounted above the front windows.

When Kake arrived at 5pm on a Tuesday evening in September 2008 the place was empty except for two chaps having a lively conversation about nutmeg cultivation, among other subjects, but it filled up a bit more later with various people all of whom seemed to know each other. Almost everyone except me seemed to be drinking wine. Music was playing, some kind of pop/rock, not too loud. On a Saturday afternoon in March 2014, there were half a dozen customers at 3pm, and again music was playing not too loud.

As of March 2014, food is served noon-2pm and 6pm-9pm Tuesday to Saturday, and noon-4pm Sunday (no food on Mondays). The menu is relatively short photo 1, photo 2, and includes a range of pizzas. Note: The April/May 2015 edition of London Drinker states that the Ashburton Arms has had a change of management and the food menu will also be changing to offer "classic recipes made from fresh, seasonal ingredients".

In September 2008, Kake tried the salmon fillet (£9), which came with roasted vegetables (red, green, and yellow peppers plus mushrooms and new potatoes) and a herb salad photo. It was pretty good; the salmon wasn't overcooked, the vegetables were tasty, and the salad was fresh (albeit undressed).

A sign seen in March 2014 advertised a pub quiz on Tuesdays from 9pm, as well as free wifi. According to their website as of the same month, "well behaved dogs" are welcome.

Accessibility: Steep ramp up from the pavement, and then a high step to get in. All on one level once you're in. The cubicles in the ladies' are a bit of a squeeze.