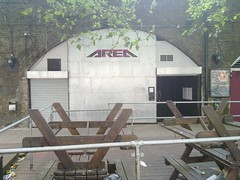 A nightclub set underneath the railway arches at Albert Embankment, in Vauxhall.

Apparently it mainly hosts gay and lesbian events; doop went there for (surprise) a psytrance party which wasn't specifically gay, but noticed a bit more attention (neither unpleasant nor unwelcome!) from guys.

There are two main dancefloors; one of them has the DJ booth sort of in the middle, back-to-back with a staircase leading up to another floor with a bar, where you can sit around and watch the dancefloor from above and behind the DJ: quite a good view. There are six bars altogether.

They sell "XL" instead of Red Bull, at £3 per can, draught Carling or Grolsch at £3.50 a pint, and various other things including bottled Magners. Water is £3 for a teeny 330ml bottle. Cloakroom is £2 for a coat and £2 for a bag; fairly efficient.

The toilets are a bit confusing: one of them has an entrance at each end, one marked female, the other simply "WC". They had become a bit messy by around 5am, although that might have been a one-off. There was a fairly unobtrusive toilet attendant. There was a "smoking area" roped off from the street outside one of the exits and equipped with bouncers, a gazebo, and gas heaters. Security were pretty friendly and hassle-free.