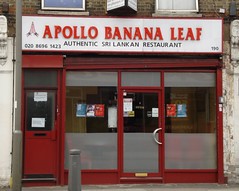 Sri Lankan restaurant in Tooting, on the road between Colliers Wood and Tooting Broadway station.

secretlondon visited in March 2016. It's very popular; when I was there people were told there were no tables for groups, and a large group were told their reservation only lasted 90 minutes. If you want to come here you might want to make a reservation.

I didn't research it in advance, which may have been a mistake. (I came here on the basis of someone having said it was vegetarian. It isn't — it's mainly meat.) I had a mutton roll which was about £1 and quite interesting, and a poori with potato masala (£5.25) which I found disappointing. I got two big pooris but the potato dish with it was bland.

All the reviews seem to rave about this place so maybe it depends on what you have. Many reviews rave about the prices — if anything I'd say it was expensive for Tooting, as curry in Tooting is cheap.