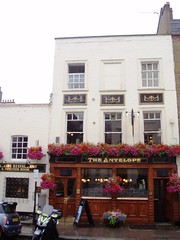 A very friendly pub close to Sloane Square, with your regular downstairs bar and upstairs bar, but also a small "snug" off the upstairs bar furnished with leather chairs and a sofa. There is a small room off the downstairs bar as well, with three tables in it. There are two further tables at the front of the main room of the pub, and at the back there's a seating area with leather armchairs, a small two-seater sofa, and an open fire (in winter).

On Ewan's visit in July 2008, the couscous with roasted aubergines was very nice, possibly not quite justifying the almost £8 price. Service was also significantly slowed by a large group booking in the room upstairs. As such, and combined with the downpour outside, the downstairs bar got extremely crowded and slightly unpleasant.

A visitor going by the name of "RNM" tells us that the food on their September 2008 visit was very disappointing. The steak and ale pie was very salty, the mash was dry and the 'seasonal vegetables' consisted of a single floret of broccoli and some cauliflower that had evidently been languishing in the bottom of a fridge for too long. The sausage sandwich was better, but the sausages were overcooked and dry.

When Nick used the Antelope to host a London.pm social meeting in March 2007 they were happy to give us use of the upstairs room, and opened the upstairs bar for us, for no fee, which worked very well. However, as of April 2008 there is a £50 charge for the use of this room, and they had no memory of letting us have it for free the previous year. The side room downstairs is also bookable.

Accessibility: Very shallow step up to get in at one door; level access but slightly uneven pavement at the other. Ladies' toilet up four or five steps.