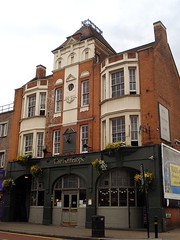 Antic pub in Tooting. Previously a Jack Beard's, it was taken over and restored by Antic in 2009.

It's quite spacious inside, with several distinct areas. At the front, claw-footed stools surround a horseshoe bar, with chairs and tables on all sides along with sofas and armchairs. Lamps and blackboards hang around the bar, suspended on chains from the high ceiling. A bright green feature wall to one side displays a collection of ceramic plates, and lines of pennants made from random unhemmed bits of material stretch across the room.

There's also a dining area behind the bar, and a large games room which according to the 2011 Good Beer Guide is decorated with antelope skulls and a stuffed beetle collection, and has a pool table and "a giant screen for major sporting events". A reasonably-sized beer garden is out the back (though a sign seen in July 2011 warned that the garden is only open until 9pm).

There are eight handpumps on the bar. On Kake's July 2011 visit, these offered Adnams Gunhill (£1.60/half), Adnams Southwold Bitter, Adnams Lighthouse, Adnams Regatta, Caledonian Nectar, Purity UBU, and a real cider. On secretlondon's May 2016 visit, six of the pumps were on and two were off, and background music was playing.

When secretlondon visited with a large group in November 2016 we felt a slightly different atmosphere. It may have been the modern jazz music which we found irritating, or perhaps the weekly events which seemed clearly not to be aimed at us. They now have yoga (£10) and a pub quiz (separately) every Monday evening, Banjo lessons every Tuesday and 'Burlesque' life drawing (£12) every Thursday. Mid afternoon the music changed to late 70s/early 80s indie and we felt more comfortable. In the games room there was a private party and sports showing. At 6pm every Friday and Saturday they open the Anchor Bar in there which serves different beer, it wasn't open on our visit.