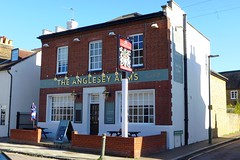 Inside, it's technically a single room, but the bar divides it into two halves which roughly correspond to a public side (bar stools and standing) and a lounge side (tables and chairs). There's also a beer garden out the back, some of which is covered over.

Kake visited on a Sunday afternoon in December 2008. The three handpumps had Spitfire, Masterbrew, and the seasonal Original Porter (£2.95/pint). The flatscreen at the front was showing sport with the sound on, but I sat at the back of the lounge side next to the door leading out to the beer garden, and the sound of the telly was completely masked by conversation. There were 15 or so other customers in, mostly men on the older side. The atmosphere was very pleasant.

Lunches served Wednesday to Saturday, according to the 2009 Good Beer Guide.

Accessibility: Two steps up to get in, but it's all on one level once you're in, and they do have an accessible toilet (which doubles as a second gents'). There's a teeny tiny ramp down into the beer garden, the kind that's like a smoothed-out step.