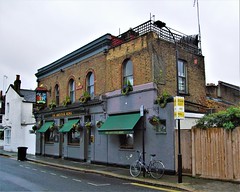 The Andover Arms has gone through a number of changes over the years. Back in 2003, when Kake first visited, it served Thai food and had a resident cat. After the retirement of the long-term landlords in late 2007, the Thai food disappeared, but it remained a locals' pub. In June 2009 it underwent refurbishment, and the new style seems aimed at being more of a continental cafe/bar than a traditional pub.

Following the refurb, the old cosy atmosphere has been replaced by a light, bright, open feel. The curtained partition between the two bars has gone, and bare floorboards lie underfoot, relieved by the occasional rug. The walls are papered with light grey flocked-style wallpaper above a dado rail, with dark wooden panelling below. Seating is provided by a couple of church-style pews (thankfully with cushions) as well as mismatched wooden chairs. A large shiny coffee machine sits behind the bar, while wine glasses and champagne flutes hang from the gantry above.

Kake visited on a Wednesday afternoon/evening in August 2009. Ales available were London Pride (£1.55/half) and Chiswick (£1.45/half); both tasted fresh, though for some reason the Pride seemed less full-bodied than the pint I drank later that evening at the Salutation.

There was a sprinkling of other customers throughout my visit; a few older men on their own as well as some younger people in groups of two or three. I thought it was getting a bit busier around 5pm, but it turned out to be a blip. Music was playing — instrumental and vocal jazz, which was OK to start off with but got a bit much after I'd been there for a couple of hours.

Food is served lunchtimes and evenings. As of August 2009, the menu on their website looks like fairly standard gastro, nothing exciting. We're not sure of the exact food times post-refurb, except that on a Wednesday in August 2009 Kake was told that evening food started at 6pm that day.

Kake's verdict: I don't hate the new version of the Andover Arms as much as some of the people in the BITE comments linked below, but it's no longer somewhere I'd make a detour to visit. I'd not say no to a quick half if I was passing and wanted a sit-down.

Accessibility: Very shallow step up to get in, but it's step-free once you're in. There seems to be a bit more floor space following the refurb, though the ladies remains a very tight squeeze.