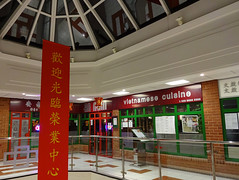 It's located on the first floor of the Wing Yip complex, which is somewhat outside central Croydon along with the other out-of-town retail parks on the Purley Way (though it's easily walkable from Waddon Station, and there are several nearby bus stops). The constraints of the space give it a somewhat utilitarian feel, though opinions may vary on whether the decor is best described as "sparse" or "subtle". It seats around 80, at tables which include induction burners for Vietnamese hotpot (lẩu).

Kake and bob visited on a Thursday evening in November 2015. There were only two other customers when we arrived a little after 7pm, though three more had arrived by the time we left. Peaceful music was playing, not too loud, and Spanish-themed for some reason.

We sampled the Vietnamese spring rolls (chả giò) in both meaty (£5) and vegetarian (£4.50) photo varieties. The skins on some of these were a little tough, and one of the meat ones was slightly lacking in meat. However, the taro-stuffed vegetarian versions made a nice change from the usual, and it was good to see both versions served with lettuce, fresh herbs, and chillies for wrapping.

Lotus shoot salad with king prawns and pork belly (gỏi ngó sen; £7.50) photo was great; it had a good balance of sweet and sour flavours, and also a good balance between vegetables, seafood, and meat.

Ong choy in spicy shrimp sauce (rau muống xào mắm ruốc; £7.50) photo turned out to contain whole prawns, which was a bit of a surprise as we'd been expecting just greens stirfried with shrimp paste; and Kake at least would have preferred it without the prawns.

Finally, tilapia fillets with green mango (cá hồng phi mắm xoài; £8.50) photo were a little muddy-tasting, though this is pretty much inherent to the fish and not a criticism of the kitchen. The raw green mango topping was a good contrast to the fried fish.

Kake's verdict: Undecided. bob really likes it here but I was generally a little underwhelmed; we may have ordered badly, though. I'll come back, as it's relatively close for me, but I'll try different dishes next time.

Child-friendliness: They have at least six highchairs (IKEA Antilop). There's a nappy change table in the ladies' but not the gents'.

Accessibility: Step-free to get in, to the seating, and to the toilets, via a lift from the ground floor. One of the doors on the way to the toilets is quite heavy. There's a large carpark outside.