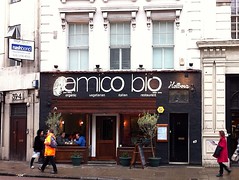 Amico Bio was an Italian restaurant on New Oxford Street in Holborn. It has now closed.