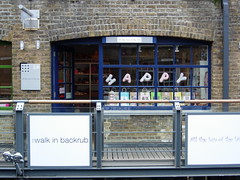 All The Fun Of The Fair

All The Fun Of The Fair

2011 update - visited by Sarah in May 2011. Re-opened after a refurb. Offers plenty of yarns sorted by colour, prices not immediately obvious, lots of washable acrylics in various weights, in lots of colours along with some mohair, cottons and crochet threads.

Bargain bin sells items for £3 or two for £5. Includes books older and newer, bucket of yarn (at time of visit, Malbragio, but in pastels not suited to my taste), and other random things.

Getting here: Kingly Court runs parallel to and between Kingly Street and Carnaby Street. It can be reached via Beak Street. All The Fun Of The Fair is on the second floor, opposite Buffy's Beads. Up two flights of stairs or there is a lift available.