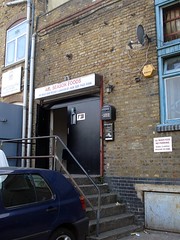 All Season Tandoori was an Indian/Bangladeshi delivery place on Mile End Road in Stepney. As far as we know, it has now closed.

It appears to be part of some kind of catering or wholesale food business; there's no on-street frontage, and the premises is accessed via a yard set back from the main road. We don't know if it's possible to collect takeaway in person, and we seriously doubt they have any eat-in facilities. Online ordering is available from Urbanbite and from Hungry House.

Kake and bob ordered via Urbanbite on a Saturday evening in June 2009. Lamb chops (£2.90 for a starter portion of two) were very tough, and not very flavourful either. The accompanying flabby "fried" onions didn't help. Meat samosas (£1.90 for two) were better, flavourful and potatoey; the pastry was just right.

Jaintapuri lamb (£6) was also good, despite containing more of the flabby onions, and perhaps the best of all the dishes we tried. It had a fair bit of chilli heat, but also a good flavour, with cardamom pods apparent in the sauce. Most of the lamb pieces had a good balance of tenderness vs. texture, though some of them were a little tough.

Uri mas (a Bangladeshi fish dish, £6) was very salty, which made it difficult to assess properly (and unpleasant to eat). It appears from the internet that "uri" refers to a Bangladeshi vegetable which is chopped and used to flavour the sauce, while "mas" refers to fish. The fish here was in large pieces, not overcooked. The dish also contained a vegetable rather like giant mangetout; these were rather bland and limp.

Tarka dal (£2.50) was oversalted too, and also very heavy on the chilli heat; Kake suspects that like the oversalting, the chilli level was a mistake on the part of the kitchen rather than intentional. It was also quite oily.

Garlic and chilli vegetables (£4) were OK, but the vegetables themselves (carrots, peas, broad beans) were strongly reminiscent of frozen mixed vegetables. Brinjal bhaji (aubergine, £2.50) wasn't bad, but there was only just enough spice flavour to overcome the excess oiliness. Kodu saag (spinach with pumpkin, £2.50) was quite bland, as was onion rice (£2).

bob's verdict: I actually quite liked most of it, though I didn't try the tarka dal. The garlic and chilli vegetables were great the next day.