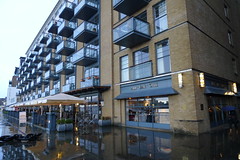 Branch of the All Bar One chain by Butler's Wharf near Tower Bridge. It is on the east side of the bridge, facing the river and near the [Design Museum]?.

secretlondon visited on Wednesday evening in April 2009. It is open and fairly bland with tables outside facing the river. As well as lots of wine they sell a range of more interesting lager and some beer such as London Pride. A round of a pint of London Pride and Erdinger Weissbier cost £7+ in April 2009.

There was some background music playing.