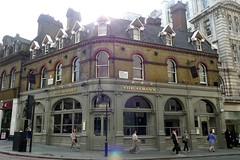 A large and attractive building on the corner opposite Great Portland Street Station housing a fairly decent gastropub. It's part of the Mitchells & Butlers Castle sub-chain.

This place tends to get quite busy after work, though it's more relaxed at the weekend. A range of distressed pub furniture — leather couches, tables and chairs — competes with groups of standing drinkers in every crevice. There's a downstairs as well (Lowdown at the Albany), which hosts club nights, comedy and music from time to time, with its own bar.

There are three handpulls, with London Pride and two others; one was off on a December 2008, and the other had a guest Welsh ale, while in September 2009 the guests were Skinner's Cornish Knocker and Robinsons Dizzy Blonde. There's an extensive range of premium lagers, such as Franziskaner, Peroni, Paulaner, Leffe, Red Stripe, Pilsner Urquell, Sierra Nevada and Hoegaarden. The first five are also available downstairs (though there are no ales downstairs). Addlestones and Aspall Cyder are also available on draught.

Food is served noon-10pm daily. The menu is pretty good photo as of September 2009, and the food Ewan has tried in the past has been tasty. There are also bar snacks, including a fine, spicy nuts & seed mix, which is served in dimpled half-pint glasses.

On DrHyde's daytime visit in December 2009 they were playing loud music that was not to his taste.

Accessibility: A ridge and a tiny ramp to get in. The ladies' is up a flight of winding stairs with a sturdy but noncontinuous handrail.