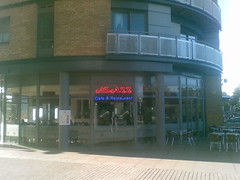 bob visited on a Monday lunchtime in October 2008. There were several other customers including a large group of about 20 people; the large group probably caused service to not be as fast as normal. The restaurant can probably seat over 50. They do takeaways as well.

The hummus beiruty was fine at £4 photo, though personally I would have preferred a bit more chilli. The lamb shawarma was pretty good (£7.50) photo, especially the garlic sauce. The french fries (£2.50) were adequate. The lemonade (£2.50) was good photo.