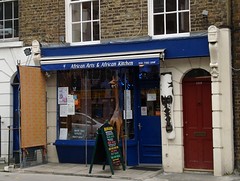 The food menu photo 1, menu photo 2 is all pre-prepared, and reheated in the bank of microwaves at the back of the tiny kitchen area.