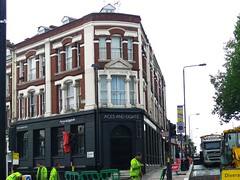 Inside, the decor nods heavily to the 1950s, with reproduction rock 'n' roll posters papering the walls, and some good use of neon signage. Seating is all up a few steps, in booths for four people each, though one in the corner is a little larger, and there's a table along the middle of the space. There are also bar stools at the same level as the bar.

The bar is dominated by a range of spirits, including many bourbons. They don't do real ale, but they do have one real cider on handpump, and Camden Town Pale Ale and Hells Lager are on keg, as well as Blue Moon and some standard lager choices. There's a cocktail list focusing on some good well-made drinks (the Parma Violence was particularly favoured by Ewan's party in August 2012). There's also a two-for-one happy hour cocktail special from 6pm-8pm Monday to Friday, as well as cheaper pints (the Camden Pale Ale was £3.60/pint during happy hour).

Food is pizza as well as side salads, located in a niche just to the rear of the bar, with 12" pizzas for £8 and 16" at double the price. The operation of this is separate from the bar, so food has to be ordered separately. It can take a little while at busy periods as there are just two ovens, but the smell wafts enticingly across the bar. Ewan tried a number of his friends' pizzas on his visit, and all were excellent quality, including a great pear, ham and gorgonzola one.

On Ewan's early-evening Wednesday visit, the place wasn't too busy and music was playing, though not particularly loudly.

Ewan's verdict: I imagine it gets much busier and louder at peak weekend periods (there's a very late licence for Fridays and Saturdays), but on my visit this was a pleasant and friendly bar with comfortable seating for small groups.

Accessibility: There are several steps to enter, as well as a couple more up to the seating area.