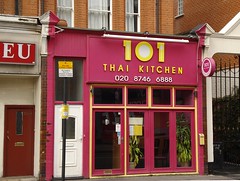 Thai restaurant on King Street near Stamford Brook Station. It's quite small, seating about 30.

bob and Jack visited on a Tuesday lunchtime in December 2008. Although there were a few tables already reserved — they were expecting two large groups — we managed to get a table. To our disappointment, they were only serving the quick lunch menu, which has about eight items on it (all £4.50). Any dish on this menu can be made with mixed vegetables instead of meat. I had the beef penang photo, which was very good. The portion was small, but not bad for the price. It was certainly spicy; the only vegetable matter in it was chillies. Jack enjoyed his green curry. The jasmine tea was fine, and we did get a whole pot of it for our 50p each.

We felt that it probably wasn't worth the walk from our office for the lunch menu, since Yupa's is closer. However, we were intrigued by some of the special dishes. I suspect they may have been down a chef, and the large groups that they were expecting may also have contributed to only a small selection being available.

The menu is quite large and has a special section at the back where there are things like catfish curry and ox liver curry. There is a specials board, but it's written in Thai with no translations. However, according to a visitor to this site (December 2008), they're always happy to translate it for you.