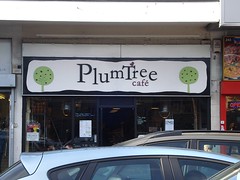 The PlumTree Cafe was a child-friendly cafe in Greenwich. It has now closed. As of August 2019 the premises are being fitted out to open as a Chinese restaurant called South & North photo.

It's quite small, seating only around 25 people (plus 5 or so highchairs) in a long, narrow space, though there are a couple of tables out the front on the pavement too. Original art hangs on the walls, all for sale. At the back, there's a small indoor children's play area with a playhouse, complete with kitchen, above a crawlspace with various toys photo and a rack with children's books.

Food is ordered and paid for at the counter, and brought to your table when it's ready. The menu has plenty of vegetarian options, including cooked breakfast with vegetarian sausages, and a "bagel mushroom burger" with portobello mushroom and a choice of cheddar or goat's cheese. There are also a few vegan options involving falafel, hummous, and/or avocado. Pleasingly, the breakfast menu is served all day.

Kake and friends visited on a Friday lunchtime in August 2015. There were a few other people in when we arrived around 1pm, but plenty of free tables. It was a warm day, and they'd propped open the back door to get a breeze though. Music was playing, very quietly.

A child's portion of pasta with tomato sauce (£3) had very soft-cooked pasta, but this worked well in context, and the sauce wasn't too salty and appeared to have been made with fresh tomatoes. A ramekin of grated cheese was provided on the side.

Kake had the avocado, sundried tomato, and rocket sandwich (£4.50; choice of granary, wholemeal, or white bread) photo. It was very thick-cut, but the bread was fairly squashy so it wasn't too hard to eat. There was rather too much bread for my taste, but the fillings were well-balanced and reasonably plentiful. A cup of Earl Grey tea (£1.80) was fine, made with a pyramid teabag from London-based Joe's Tea Co, and served with a little biscuit.

Kake's verdict: The preschooler in our party loved the play area, the food was fine and not overly expensive, and the staff were patient and helpful. I'd happily come back if I was in Greenwich with a child.

Child-friendliness: Children's menu (including pasta, things on toast, and a "nibble plate" of cheese, olives, apple, bread, ham, and fruit), at least 5 highchairs (with detachable trays), play area, and a pull-down nappy change table over the toilet. A sign inside the toilet asks that you take your nappies home with you, as they don't have the facilities to dispose of them.