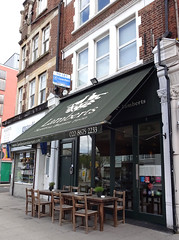 Lamberts was a British restaurant in Balham specialising in seasonal food made with ingredients from British suppliers. It closed down for good in January 2020.

British restaurant in Balham. They specialise in seasonal food made with ingredients from British suppliers.

It's a fairly small space, running back from a modest frontage. Floor-to-ceiling windows let some light in at the very front, but most of the seating is further back, discreetly lit by recessed spotlights. A large central pillar breaks up the room, allowing a little more privacy than would otherwise be possible. Decor is in muted shades of mustard and brown. The tables are varnished wood, bare of tablecloths but set with heavy cutlery and thick linen napkins. A wooden floor lies underfoot.

Kake visited on a Thursday lunchtime in April 2016. There were half a dozen other customers in when I arrived a little after 1pm, some of them apparently regulars, and a couple more arrived while I was there. Music was playing quietly.

I went for their lunch offer, which is available Tuesday to Friday and offers a vegetarian sandwich, a meat sandwich, or the dish of the day, plus a glass of wine, beer, or soft drink, for £10.

The dish of the day turned out to be a vegetarian one: potato cake with sprouting broccoli and a fried duck egg photo. An appetising scent of garlic heralded its arrival at the table, though this wasn't overwhelming in the actual dish. The components were good both individually and in combination. The potato cake had a fairly soft texture, and wasn't stodgy at all. The yolk of the egg was creamy rather than runny, but this worked well with the texture of the potato cake. The sprouting broccoli was perfectly cooked and seasoned.

Service was fine; efficient without being intrusive. A bottle of chilled tap water was brought as soon as I sat down, without me having to ask, and left on the table. A 12.5% service charge was added to the bill, which was accompanied by a little chocolate petit four.

Kake's verdict: I liked it, and would like to come back.

Child-friendliness: There's a sturdy fixed shelf for nappy changes in the handwashing area of the toilet (this area isn't segregated by gender). They also have small stools to help children reach the sinks.

Accessibility: No steps to get in, but the toilets are down a spiral staircase (with a handrail on one side), and the cubicles are a bit of a squeeze. The water glasses on the table are unusually wide, and a little hard to hold if you have smaller hands or a weaker grip.