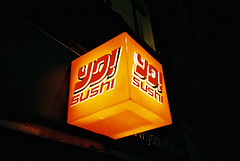 A chain of conveyor belt sushi restaurants, with a number of branches in London. The price of each plate of sushi is indicated by the colour of the border of the plate. Filtered tap water is dispensed via taps (one still, one fizzy) at each seat; it's a fixed price however much you drink. Miso soup and green tea are also a fixed price for as many refills as you like, but you do have to ask for each refill. In addition to the plates on the conveyor belt, most (if not all) branches also have a menu of special dishes which you can order separately.

Yo Sushi branches on this guide (view them on a map):