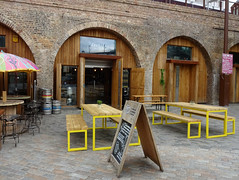 Archie's was a small cafe and bar in a railway arch next to Deptford Station, specialising in cheese-based food. It has now closed.

Cafe and bar in a railway arch next to Deptford Station, specialising in cheese-based food.

It's a small space, tucked inside a railway arch, with an even smaller open kitchen at the back. A fridge to one side holds bottles and cans of craft beer, and shelves next to this are stacked with ingredients including spices, wheel-shaped pasta (for their version of macaroni cheese), and house-made pickles photo.

Seating for just 16 people is provided at slabby wooden tables with matching benches, though in good weather there's more outside in the pedestrianised square.

Kake visited on a Friday lunchtime in April 2017. Arriving a little before 1pm, I was the only customer, though four or five others turned up while I was there. Music was playing, not too loud.

A Cropwell Bishop stilton, bacon, and pear chutney toasted sandwich (£6) photo was pretty good. The bread was sliced thinly enough not to overpower the other ingredients, yet was sturdy enough to hold everything in. There was plenty of stilton, and the bacon added interest. I would have preferred just a touch more of the chutney, but overall it was very well balanced. House-made pickles on the side were a little too soft, but had nice spicing including a hint of chilli.

Service was friendly and helpful. Tap water arrived in a huge glass jug. I was brought one tiny napkin with my food, which wasn't really enough for something eaten with one's hands, and I wasn't the only customer who ended up asking for more. No service charge was added, but there was a tip jar by the till.

Kake's verdict: I'd come back if I was in the area and craving melted cheese.

Accessibility: No steps in, though the ground outside is cobbled and uneven. No customer toilet.